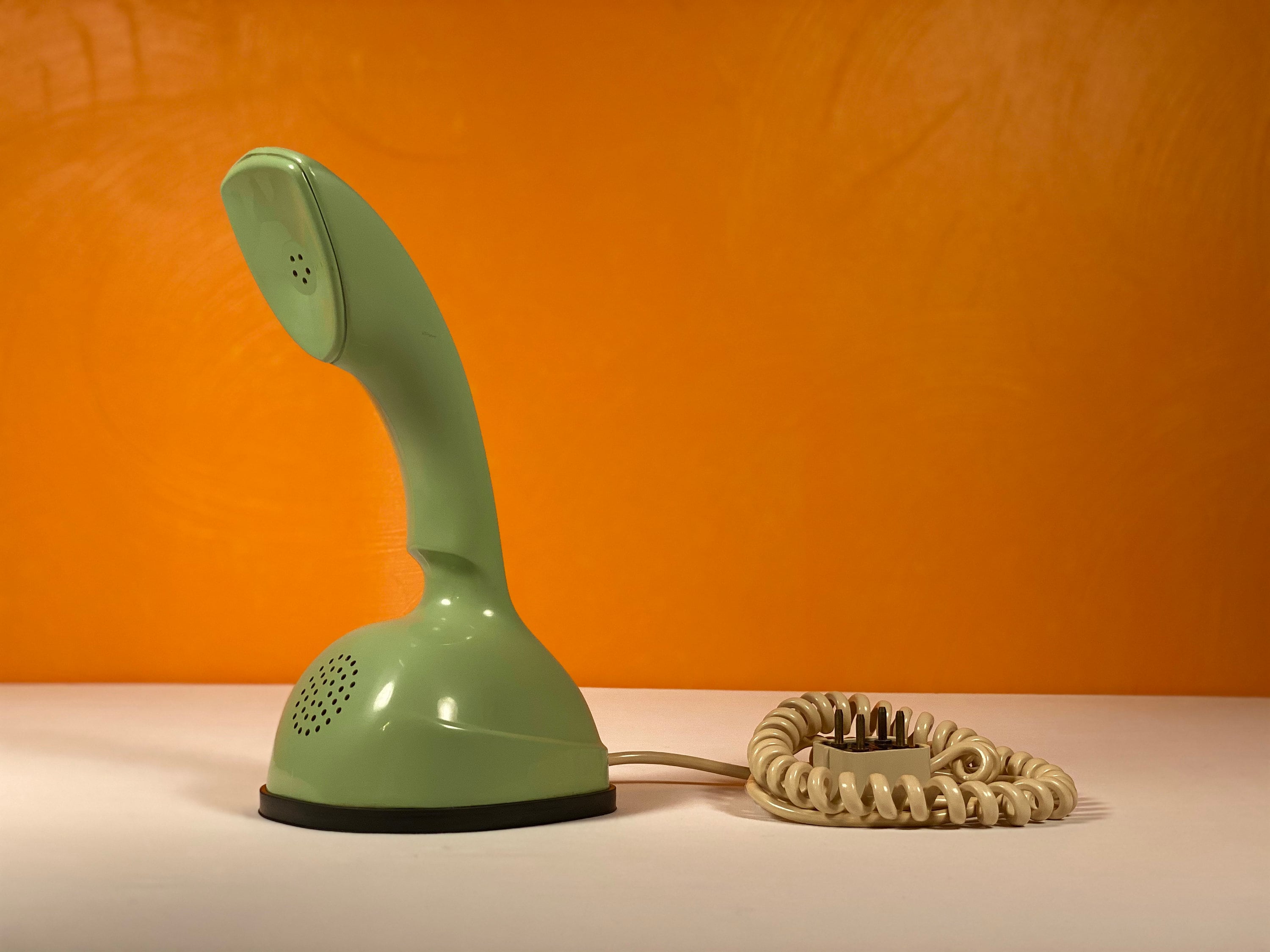 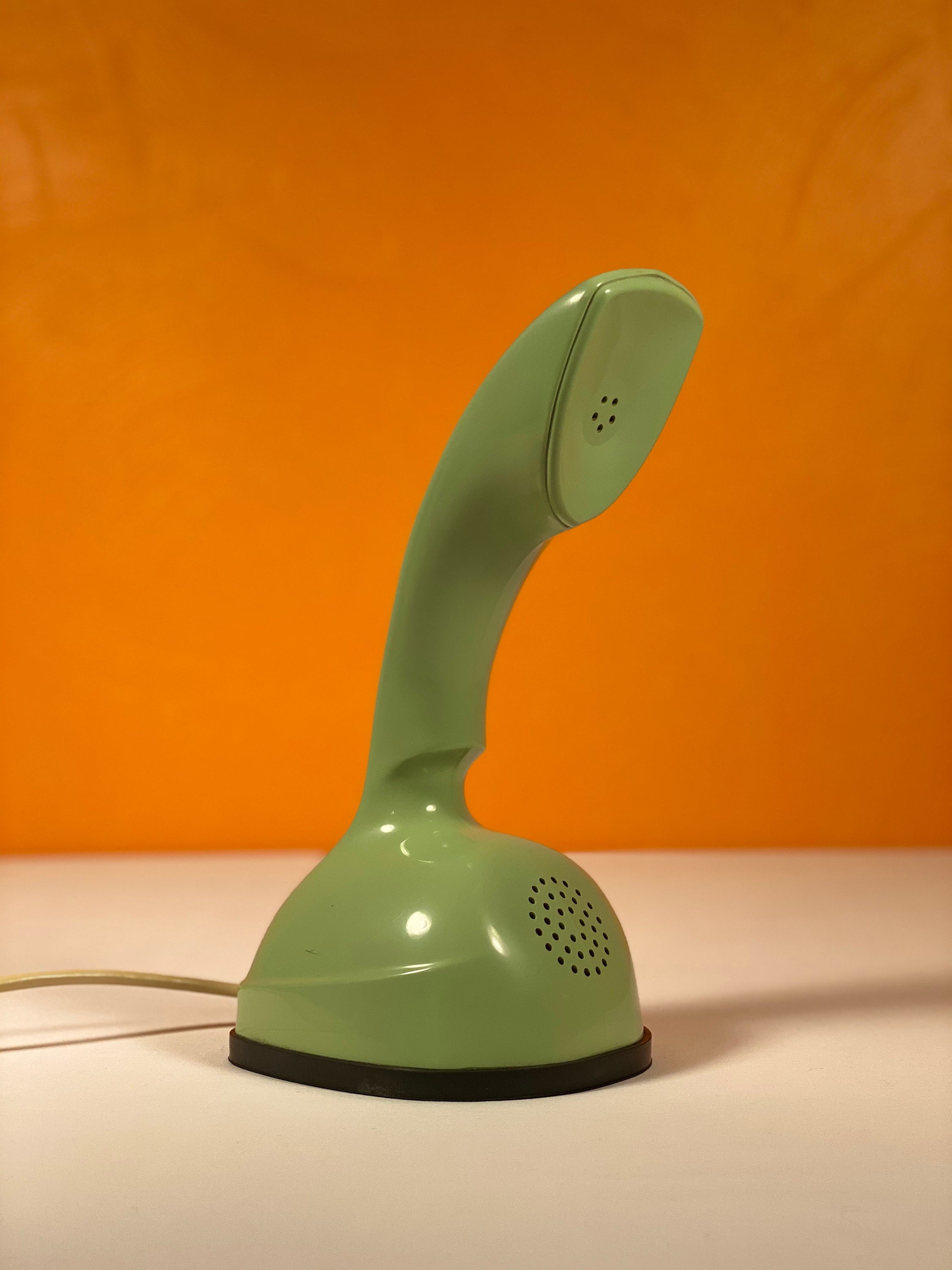 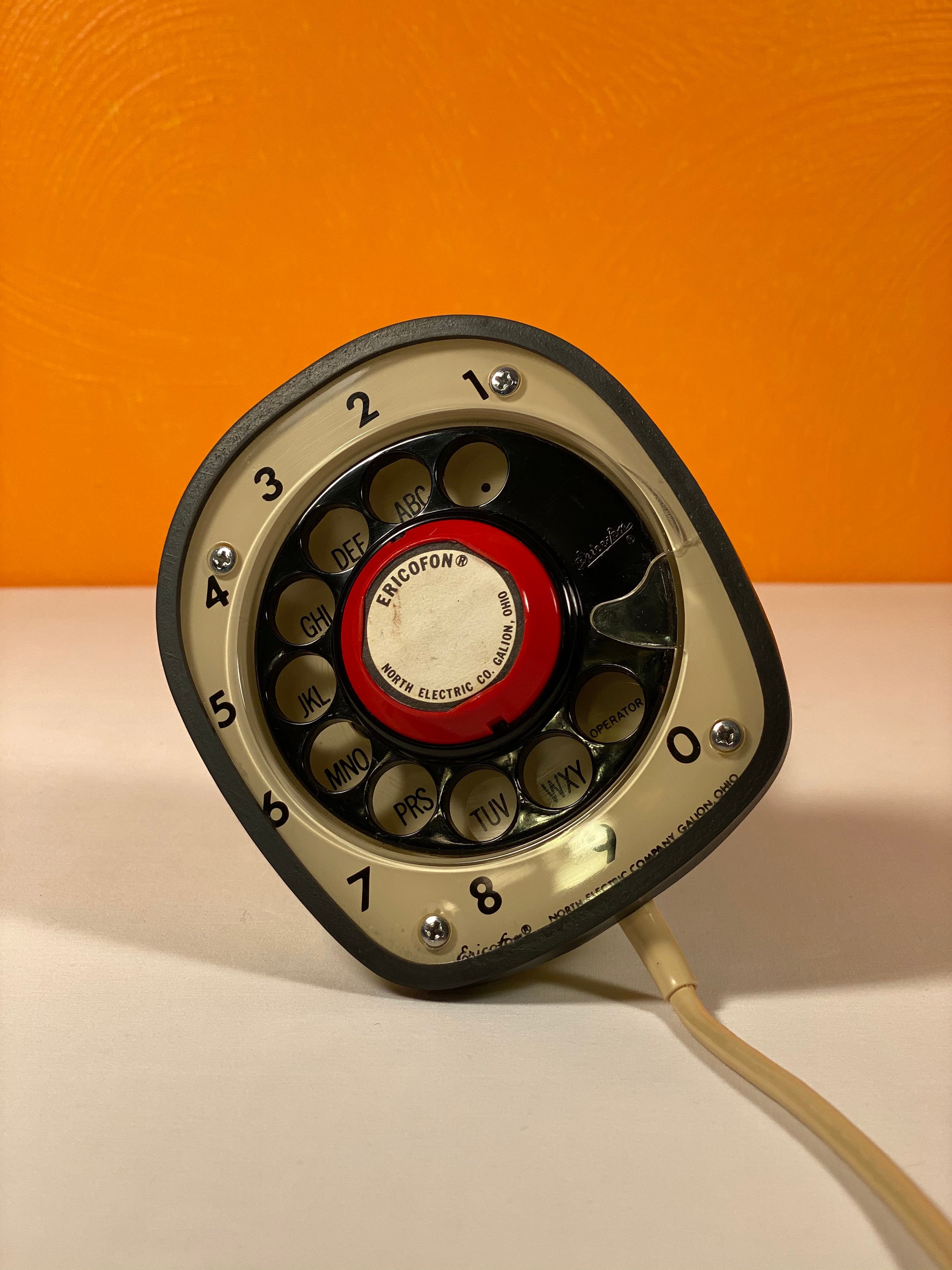 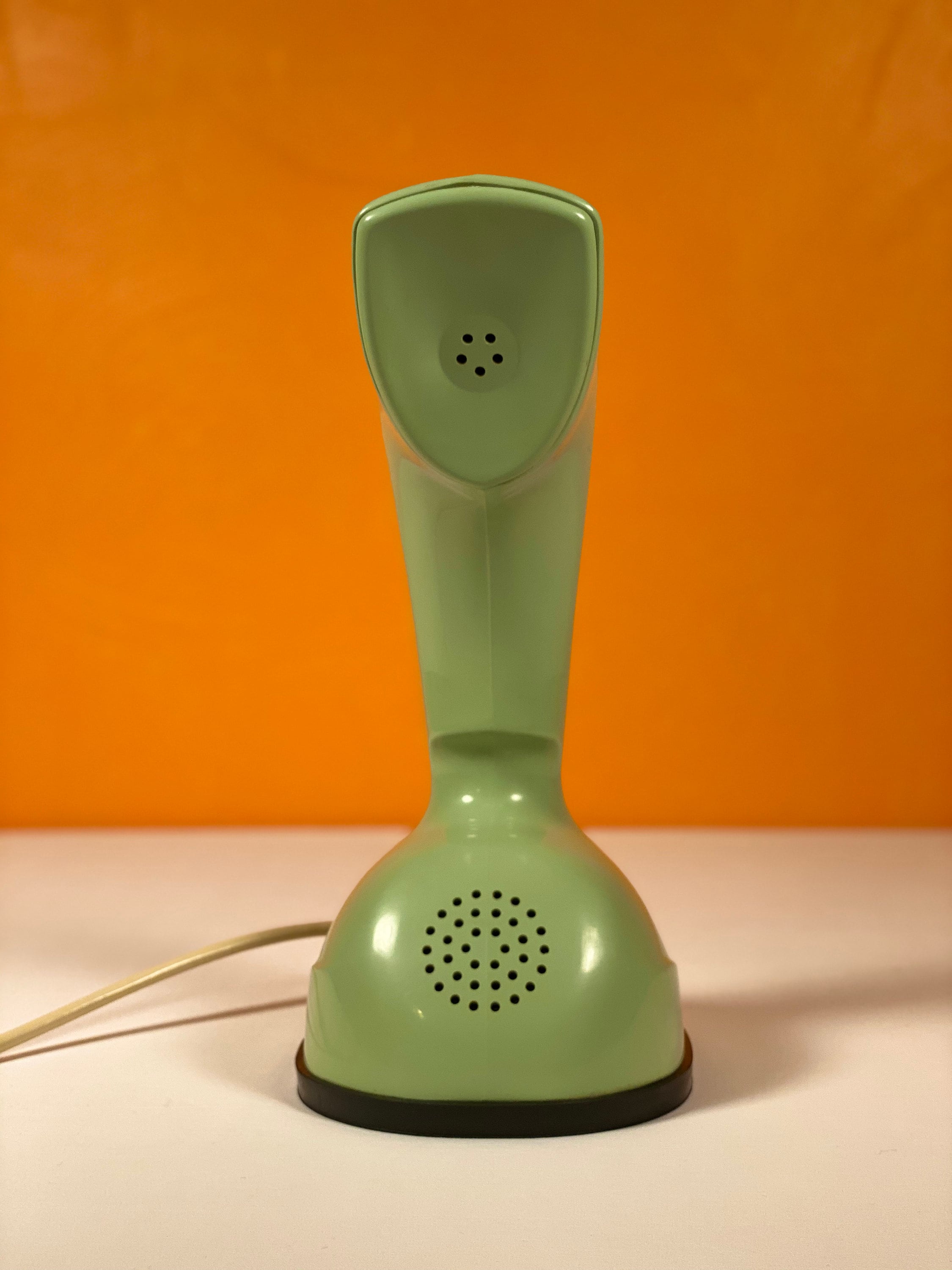 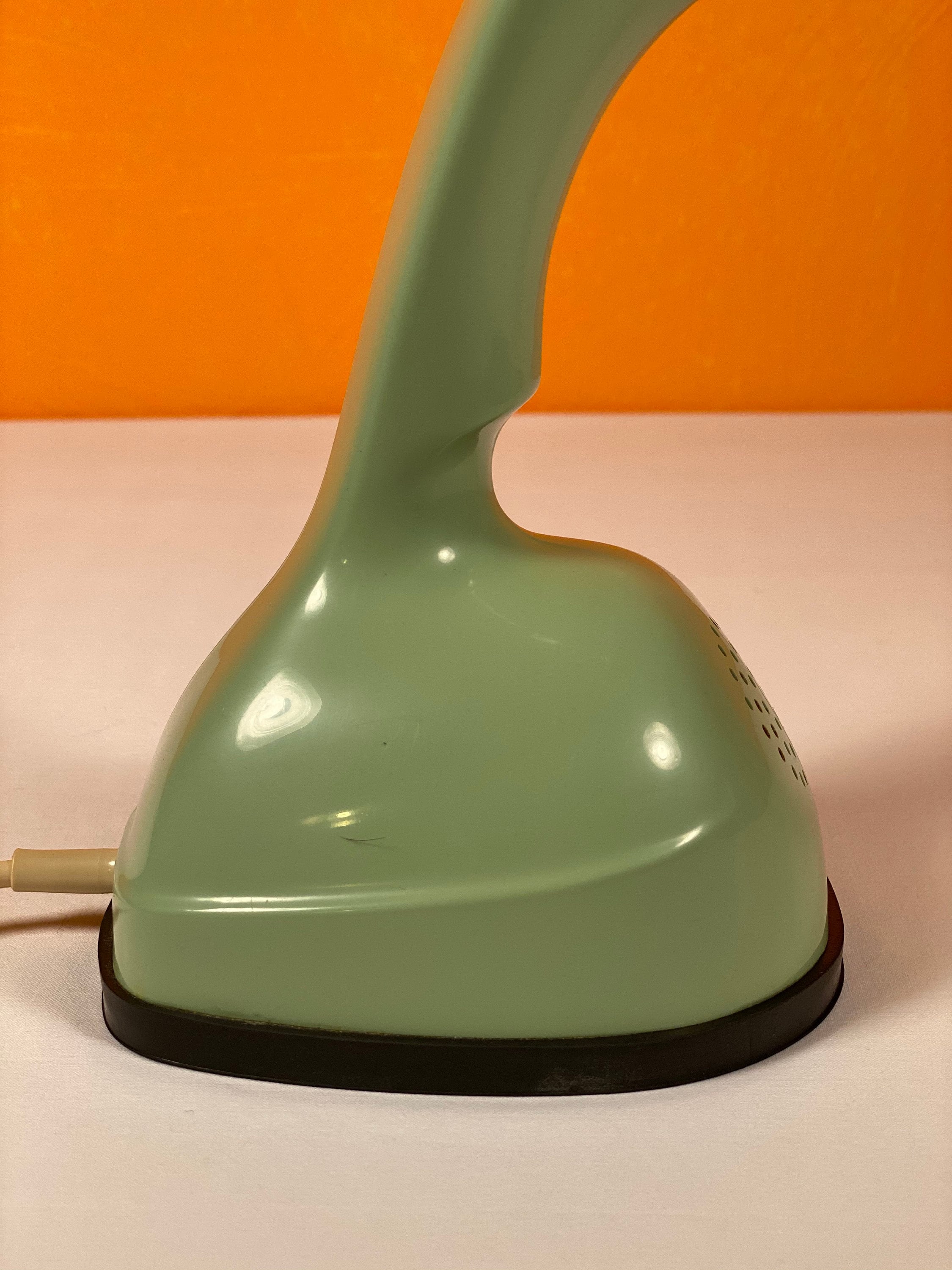 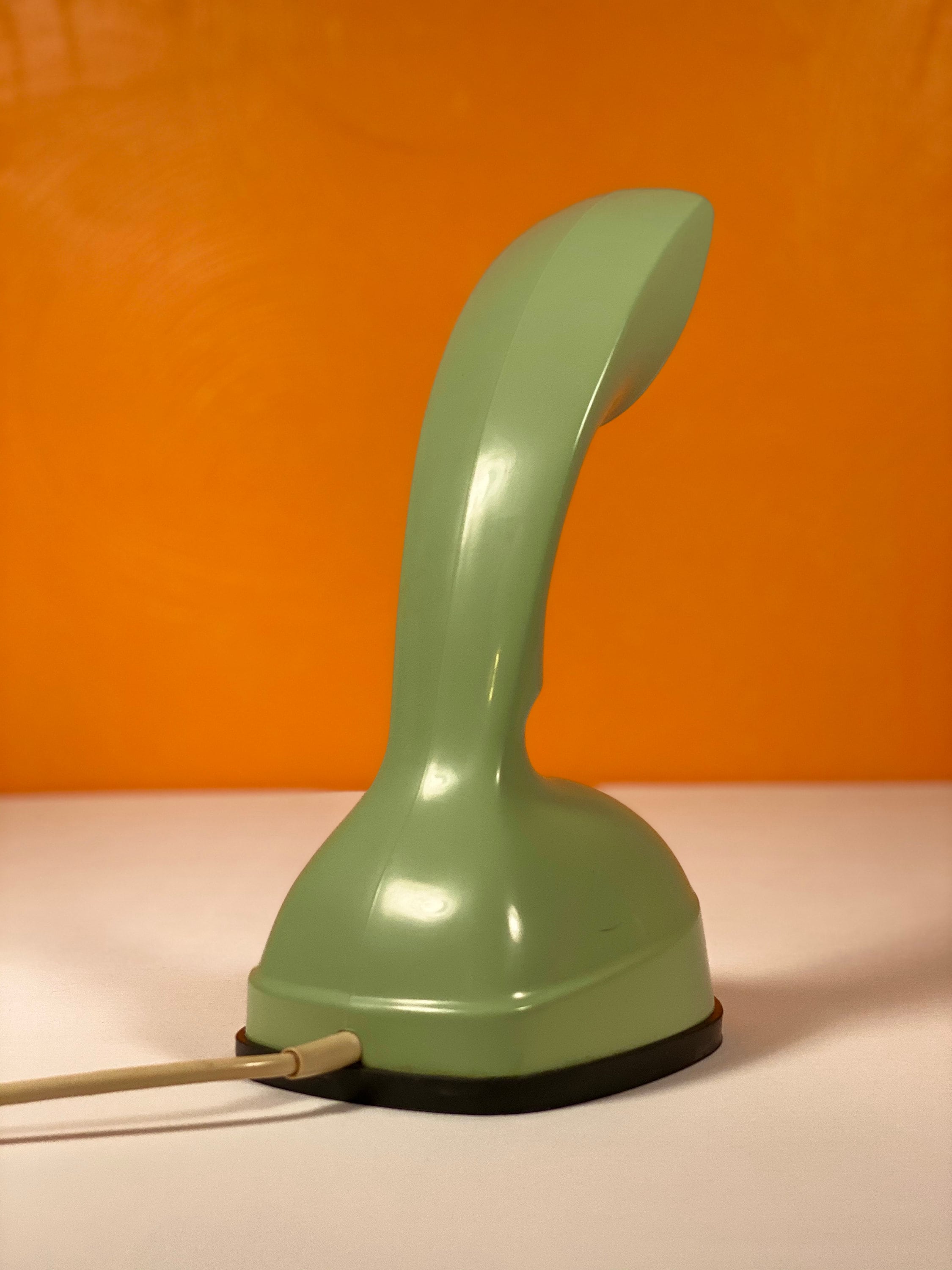 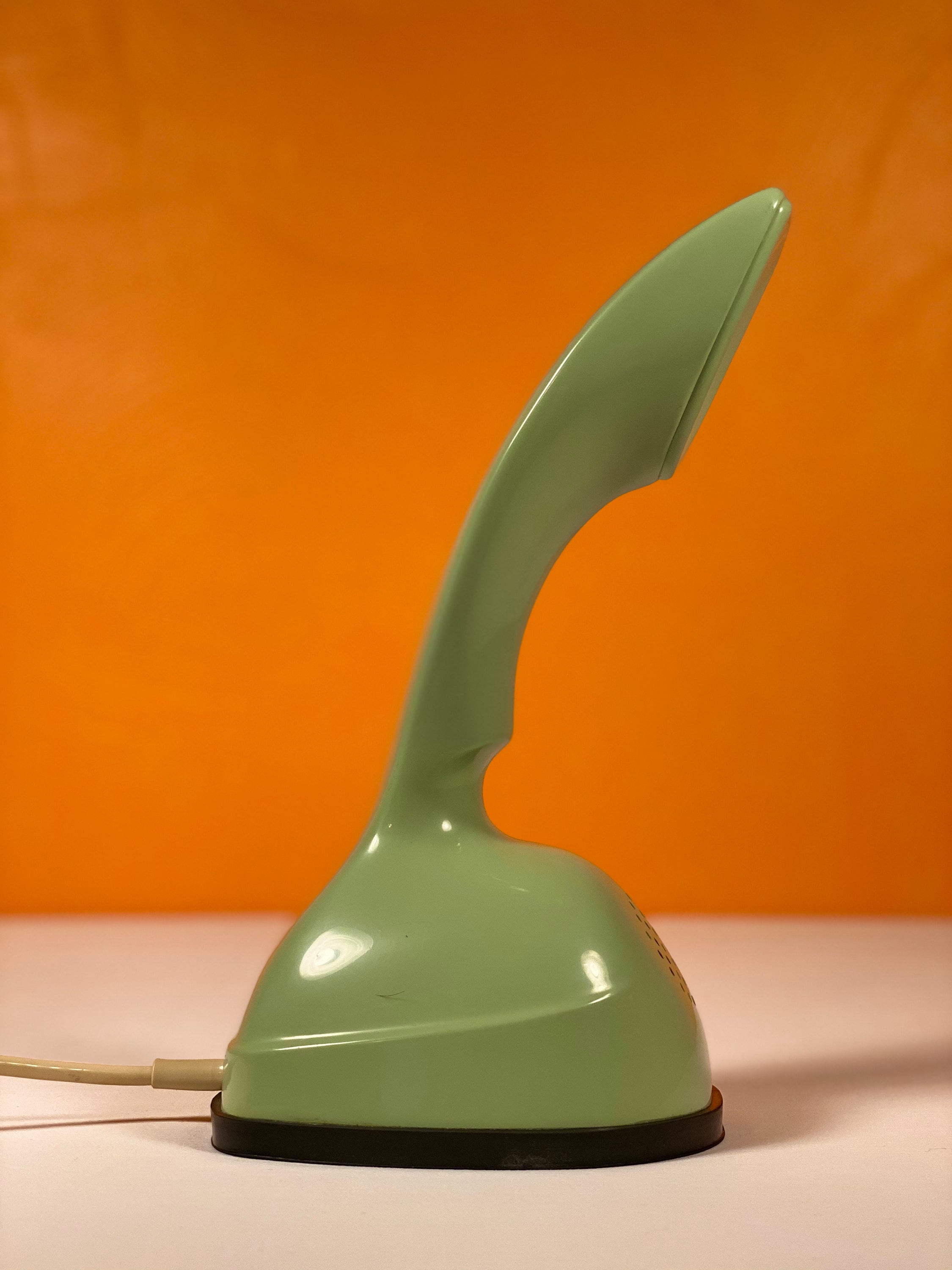 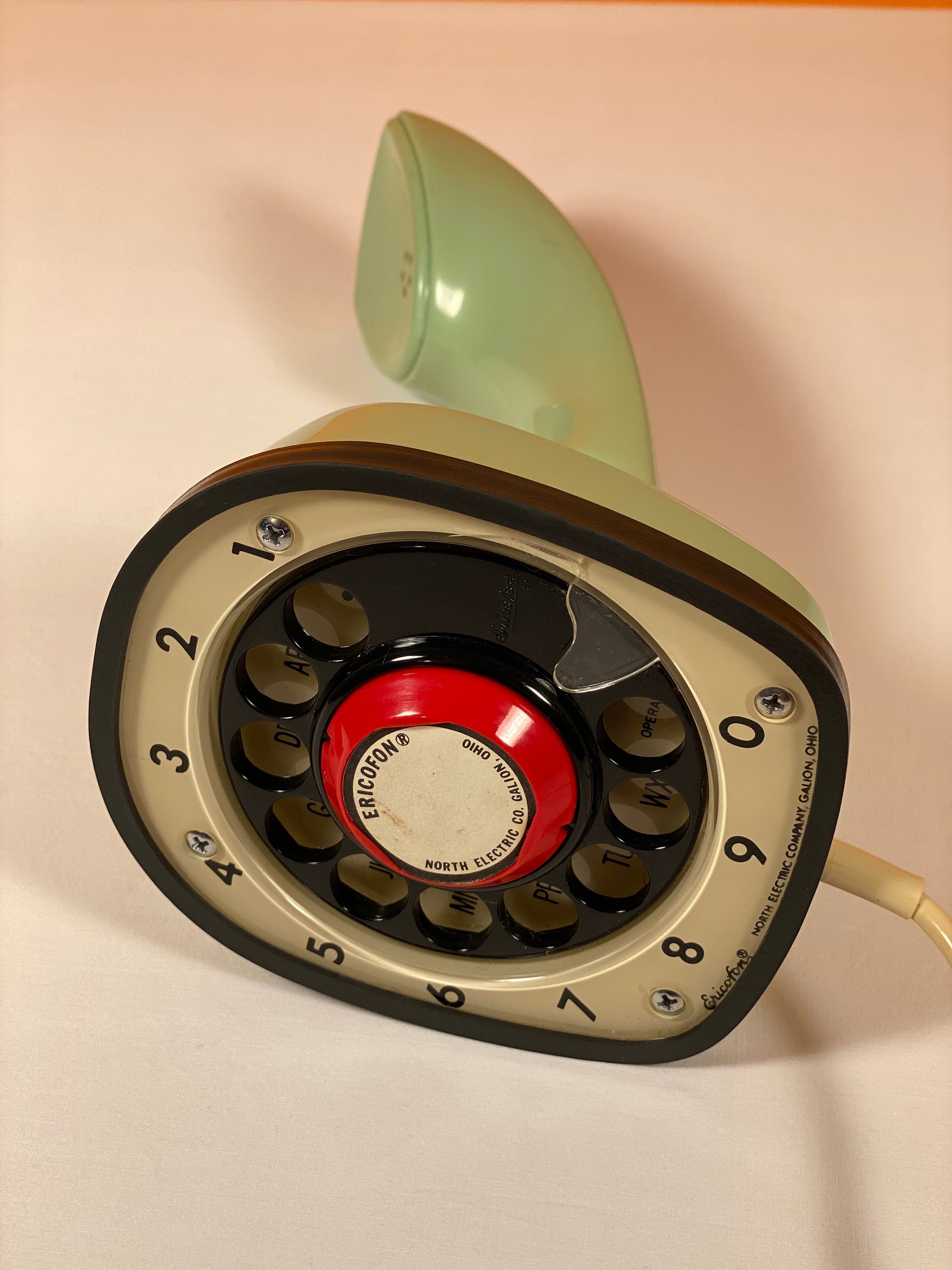 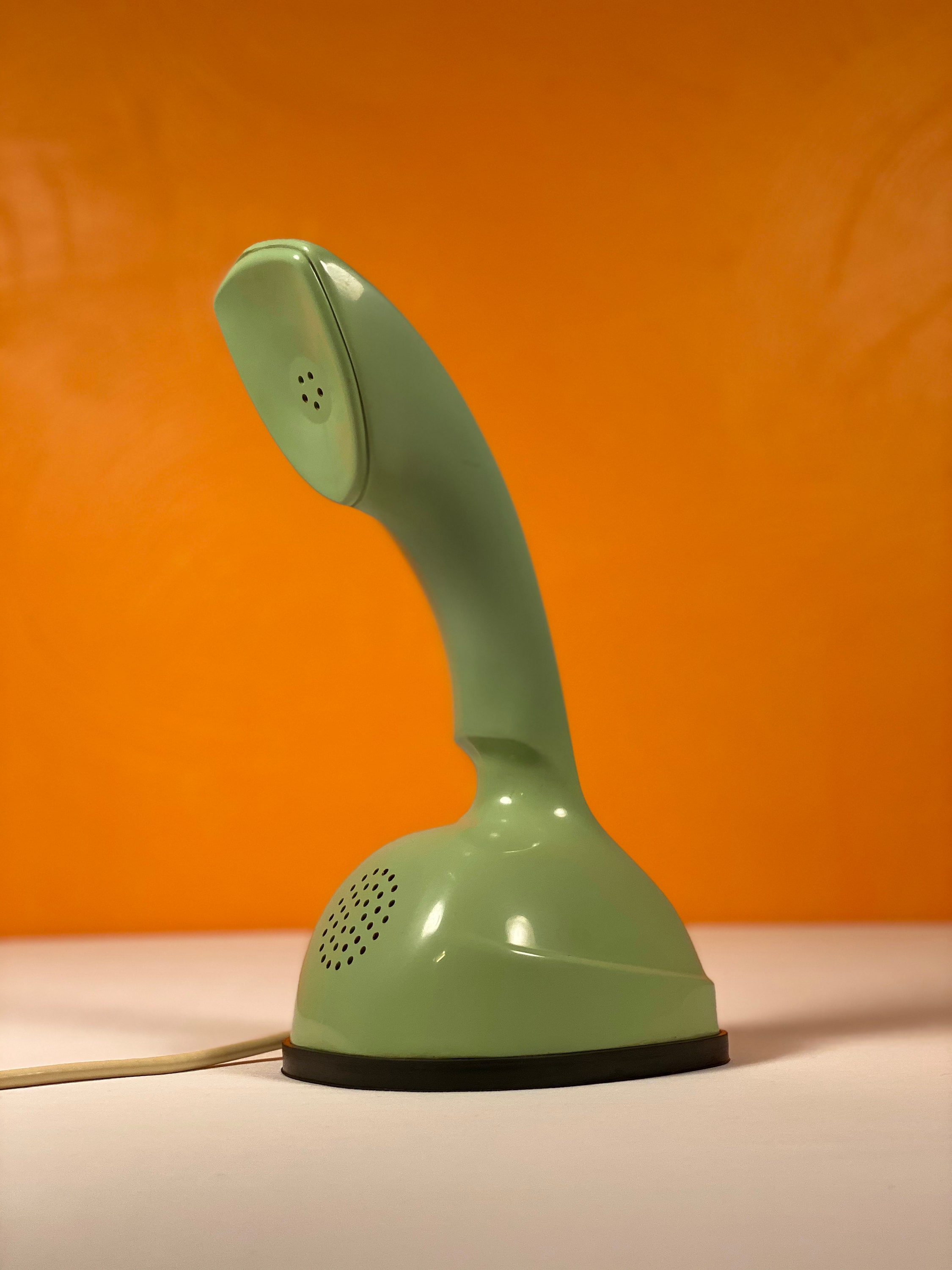 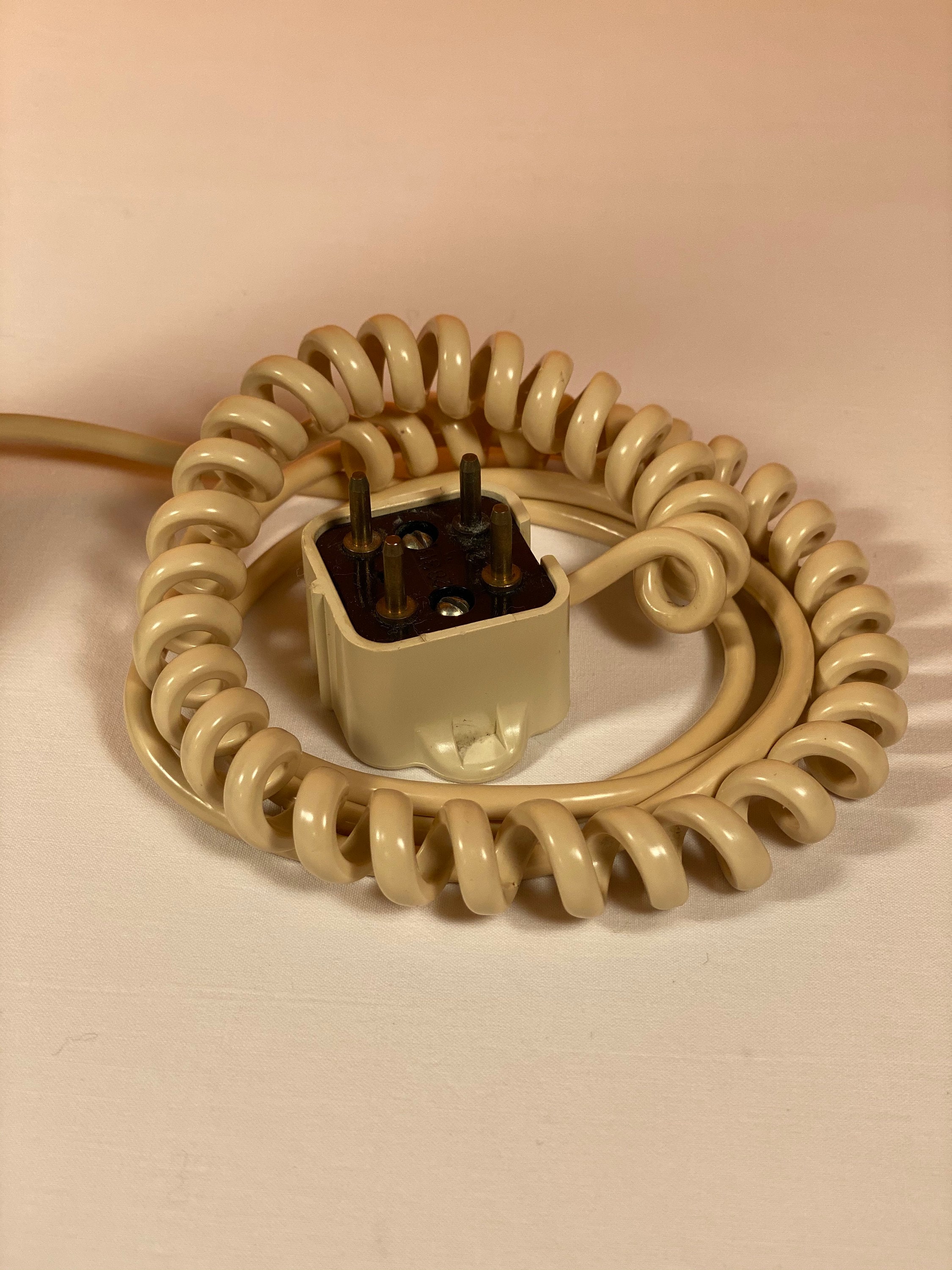 ***Please note that all Houseware items on our website are only available for purchase online and are not available in-store unless requested in advance. (We do have a large selection of Housewares available in both locations that are not listed online.)***

Description:
Here is a very nice piece of Scandinavian mid-century modern design, an Ericofon in a light mint green color designed by Hugo Blomberg, Ralph Lysell, and Göosta Thames in 1954 and launched by Ericsson in 1956. (More details on the history of Ericsson and the development of the Ericofon can be read below). This particular Ericofon was manufactured in Galion, Ohio, circa 1960s. This phone still has its original plug so we were unable to test it, the dial turns well and it still looks every bit as stylish as it was back in the 1960s. This piece is in good untested original condition.

Ericsson and the development of the Ericofon
A world-leading manufacturer of telecommunications equipment, Ericsson’s origins can be traced to the last quarter of the 19th century when Lars Magnus Ericsson (1846-1926) founded the company in Stockholm. Initially, the business concentrated on the repair of telegraph equipment. But soon its founder recognized that there was a real need for improvements to be made to existing telephone equipment. By 1878, the company was developing telephones that were based on an earlier design by Alexander Graham Bell (1847-1922). In the early 1890s Ericsson began developing telephones of its own design, and in 1892 launched its own first major product, a desk instrument with a handheld microphone. Soon after this, the company began exporting telephones throughout Europe, and its success led to the building of several overseas factories, including one in Mexico. In 1909 Ericsson launched the first cradle telephone, model 88, which was enormously influential throughout Europe. Seeking to update this landmark design, the company commissioned the artist Jean Heiberg (1884-1976) and the Norwegian engineer Johan Christian Bjerknes in 1930 to design a telephone with a Bakelite casing to replace existing metal types. Developed using plaster prototypes, the resulting DHB 1001 telephone was less angular than earlier models, and its coherent relationship between the handset and the main instrument body established the standard for telephone design until the late 1950s. Although it was not the first to use Bakelite in its construction, the DHB 1001 telephone was highly influential and inspired Henry Dreyfuss’ (1904-1972) later plastic model 300 (1930-1933) for Bell. Between 1940 and 1954, Hugo Blomberg (1897-1994), Ralph Lysell (1907-1987, and Gösta Thames (1916-2006) designed and developed another groundbreaking model for Ericsson, the Ericofon (launched in 1956). This unusual and forward-looking telephone had a completely unified form that integrated the earpiece, mouthpiece, and dial. The design of the Ericofon, which incorporated new lightweight materials such as plastic, rubber, and nylon, was made possible by the increasing miniaturization of technology. Fun yet stylish, it was the most popular one-piece telephone for over three decades. In the early 1970s, an updated push-button version of the Ericofon was introduced known as the Model 700.

*For our Housewares that include free shipping, we will use the most cost-efficient option which is usually USPS Retail Ground (7-10 day delivery) or a Priority 2-Day Flat Rate Box depending on the size of the item.

Thank you for looking!

All sales are final and we encourage all buyers to contact us for more information on any specific product before purchasing. All of our items are from the mid-century era and may have some age appropriate wear.

EFFECTIVE 3/17/20, PLEASE NOTE - ITEMS PURCHASED OVER THE NEXT FEW WEEKS MAY TAKE LONGER THAN NORMAL TO GET SHIPPED AS WE WORK WITH OUR STATE'S MANDATES IN RESPONSE TO THE COVID-19 VIRUS. WHERE NECESSARY, WE CAN OFFER STORAGE ON ALL ITEMS PURCHASED UNTIL WE FIND AND BOOK FREIGHT/INDEPENDENT SHIPPERS WHO ARE EITHER STILL OPERATING, OR ONCE THEY RESUME NORMAL OPERATIONS. THANK YOU FOR YOUR UNDERSTANDING DURING THIS TIME.

Because cost varies greatly with weight, size, and destination of an item, we cannot provide a firm and fixed price quote for shipping in the shipping estimate calculator in this listing. We will add the accurate shipping costs to the listing once it’s is agreed upon by both parties.

Our quotes will be for blanket-wrap white glove shipping services, or we are open to other services you may have used prior. We can facilitate pick up or in-person collection during normal business hours whether it be from the customer or a third party shipping service.

As always please feel free to reach out to us should you have any other questions regarding shipping.

But please contact me if you have any problems with your order.

All sales are as-is and are final. Please reach out and ask any questions on the product before you purchase.

0 items in your cart